In today's episode of life, I escape to the Scottish Highlands, where the traffic jams and getting stared at by the locals is exactly what I need.

Occupational hazard when your clients are teenagers. The last four days have been running around Edinburgh with them and while I will never tire of Scotland's compact, hilly capital, at this very moment, I am tired.

In a move that for some might seem irresponsible, I change my flight home. I rent a car. I ask for time off. In that order. Ask for forgiveness, not permission, I always say.

I wake up with that feeling of excitement. You know the one. Feels like fluttering butterflies. I'm so ready for the day despite not knowing exactly where I am headed.

It's the journey, not the destination.

But first, coffee. Over sips of latte, I scour the internet and unearth every inch of Scotland. I can't decide. Too many options. In a random move, I ask the lass behind the counter at the cafe where she thinks I should go.

Lass: Go north, to the highlands.

Lass: Go north until you the land meets the sea.

Actually, she said, "check out Dunnet Head, my family's from there" but what's life without a little drama.

I head out for the most northerly point of both Scotland and mainland UK. I'm taking the M90 to A9, the most direct route, knowing I will stop along the way for photos and food. On the way back I will meander the long way, along the east coast through Aberdeen.

I can't stress enough this fact about stress. According to research from Harvard Medical School, chronic stress can trigger your sympathetic nervous system's fight or flight response. We so often get held up by lots of little events where the stress of feelings like sadness, fear and worry become “stuck” or “trapped” in the body.

The simple act of changing your scenery could help release tensions after a stressful episode. You don't have to go far but you do have to do something. 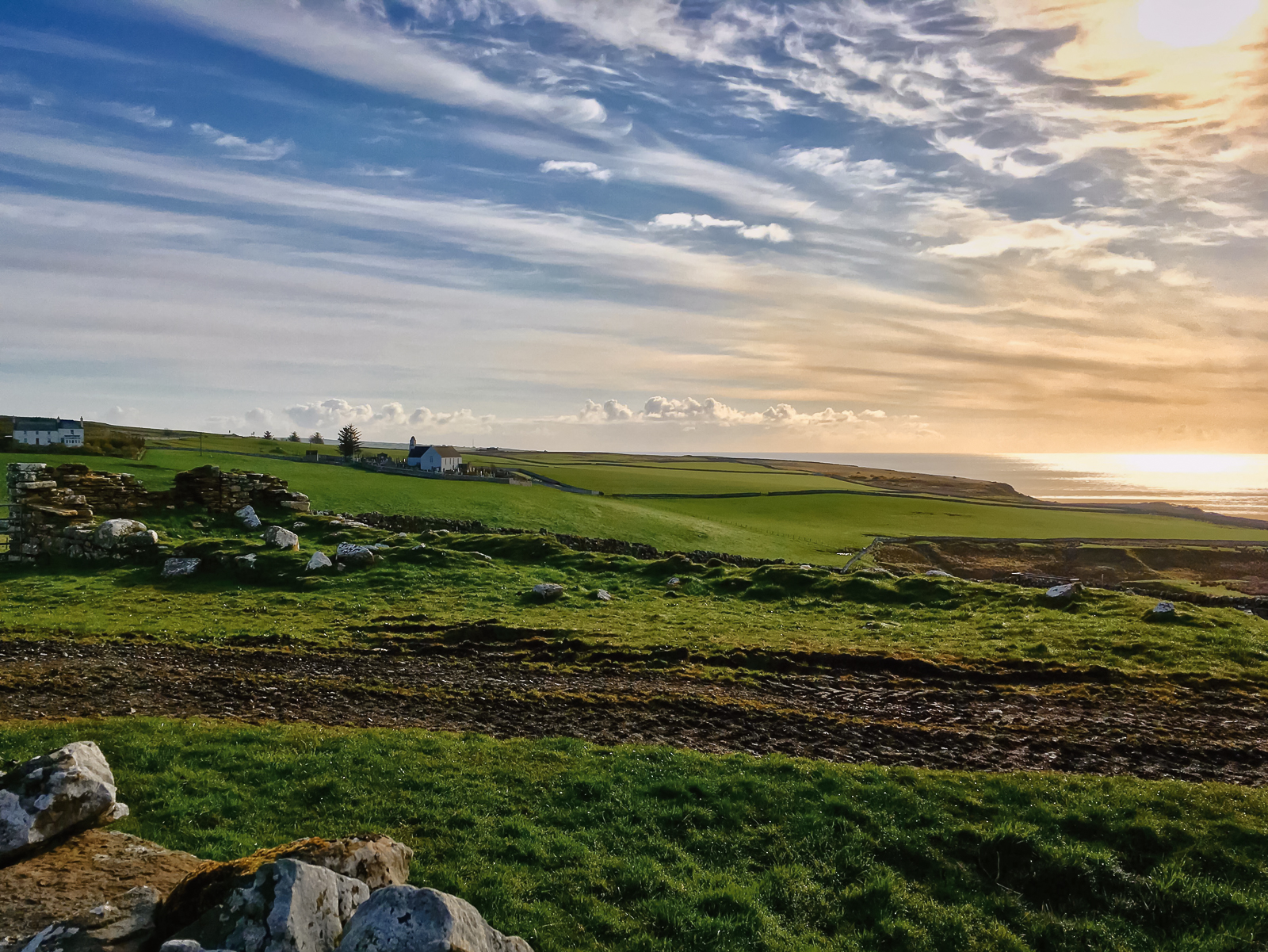 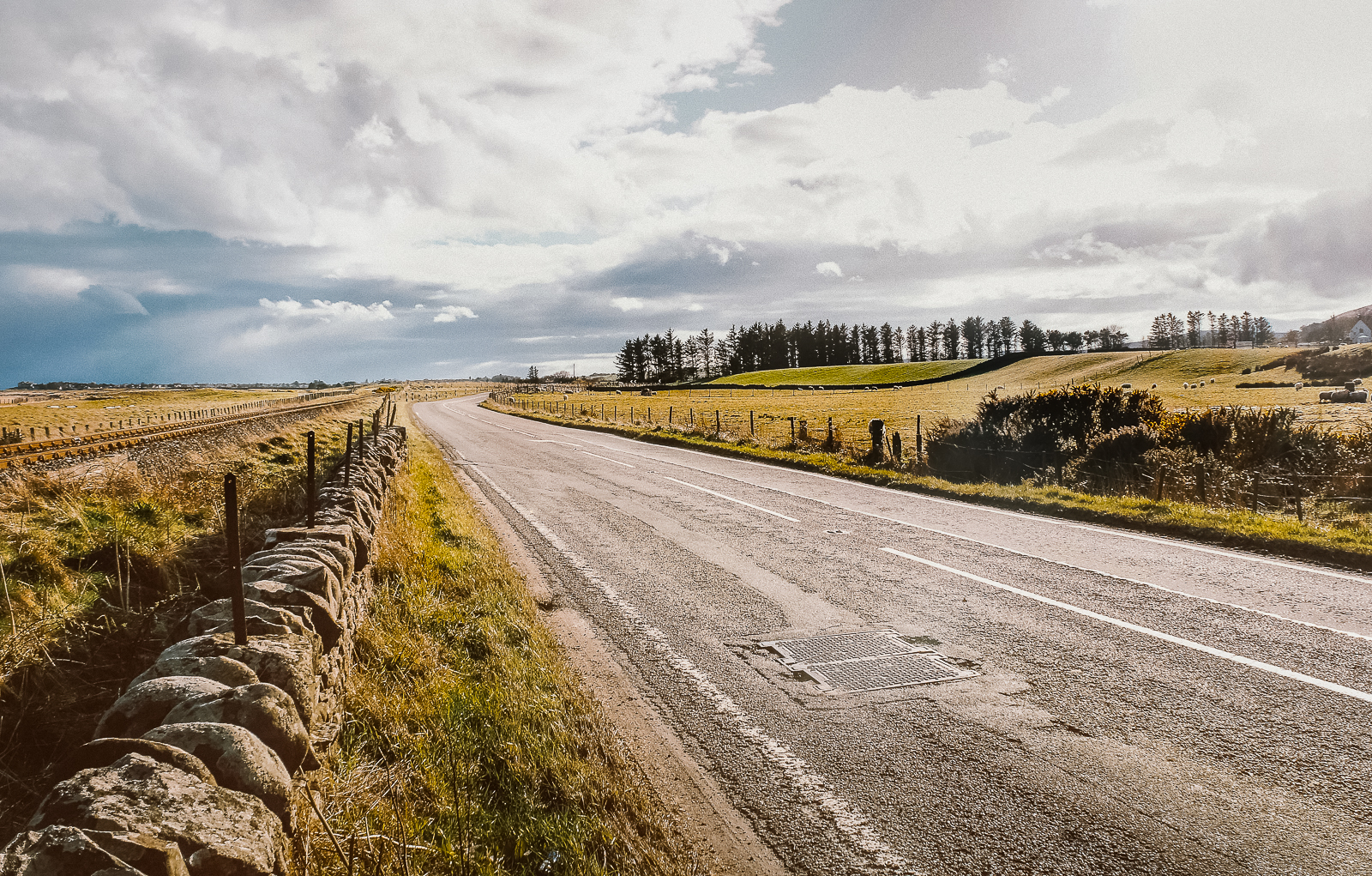 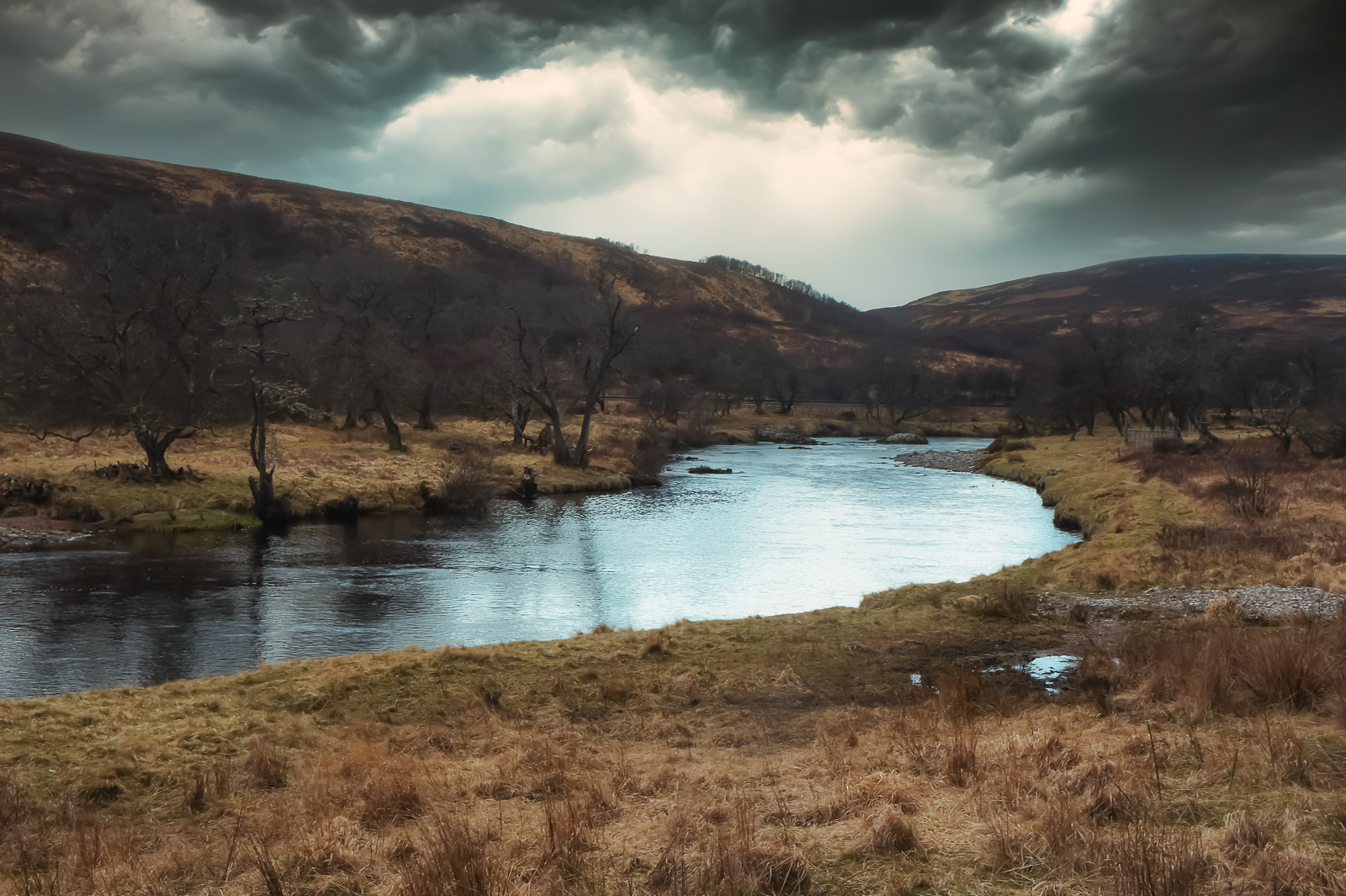 Notable stops along the drive

Be patient with the traffic in the Highlands

John O’Groats is a small coastal village scattered over a large area and is mainly a rural farming community situated in an extreme location. If the name sounds more Dutch than Scottish to you, then you're not wrong. Jan de Groot, a Dutchman, built his house in the area during the reign of James IV (1488 – 1513). De Groot built an octagonal house with eight doors, one for each of his seven sons and himself, along with an eight-sided table so that no one occupied the head of the table. Alas, today, there is just a mound to mark the site of the unique house near The Inn at John O'Groats. De Groot also ran a ferry to the Orkney islands and charged 2p a trip. The coin for this denomination became known as the ‘groat’ and over time, the name Jan de Groot has subsequently changed to John O’Groats.

THE VILLAGE John O’Groats as a destination has a far bigger name and reputation than the village itself. People expect a ‘town’ or more but John O’Groats isn’t a Disney World nor is it even like its southern overly commercial counterpart, Land’s End. There are two focal points in this village: the busy part with the Post Office, Grocery store (which has a cash machine) and the Seaview Hotel. The other less busy "at the end of the road " harbour area with the Inn, and main car park which is free.

You'll also find a woollen mill, a Tourist Office to answer all your questions, toilets that cost 20p but are award-winning loos of a very high standard and worth every penny. The craft village from where you can buy quality items made at John O’Groats including candle makers, paintings and prints by local artist David Body.

THE INN The Inn at John O’Groats is a reincarnation of the iconic former John O’Groats Hotel, built back in 1875. It went through a multi-million-pound regeneration and reopening with it's updated look in 2013.

A Norse style extension added in 2013 provides for a dramatic splash of colour against the coastal landscape.
{"items":["660682_1545591d84294f00a54cbd9b1aa54e99~mv2.jpg","660682_a0b1258d22694234a6703fbd219514e2~mv2.jpg","660682_287a60a0bf854a87ae6fb1ebdd034027~mv2.jpg"],"styles":{"galleryType":"Columns","groupSize":1,"showArrows":false,"cubeImages":true,"cubeType":"fill","cubeRatio":1,"isVertical":true,"gallerySize":300,"collageAmount":0,"collageDensity":0,"groupTypes":"1","oneRow":false,"imageMargin":10,"galleryMargin":0,"floatingImages":0,"chooseBestGroup":true,"smartCrop":false,"hasThumbnails":false,"enableScroll":true,"isGrid":true,"isSlider":false,"isColumns":false,"isSlideshow":false,"cropOnlyFill":false,"fixedColumns":3,"enableInfiniteScroll":true,"isRTL":false,"minItemSize":50,"rotatingGroupTypes":"","rotatingCubeRatio":"","gallerySliderImageRatio":1.7777777777777777,"numberOfImagesPerRow":3,"numberOfImagesPerCol":1,"groupsPerStrip":0,"borderRadius":0,"boxShadow":0,"gridStyle":1,"mobilePanorama":false,"placeGroupsLtr":false,"viewMode":"preview","thumbnailSpacings":0,"galleryThumbnailsAlignment":"bottom","isMasonry":false,"isAutoSlideshow":false,"slideshowLoop":false,"autoSlideshowInterval":4,"useCustomButton":false,"bottomInfoHeight":0,"titlePlacement":"SHOW_ON_HOVER","galleryHorizontalAlign":"center","galleryTextAlign":"center","galleryVerticalAlign":"center","scrollSnap":false,"itemClick":"link","fullscreen":false,"allowSocial":false,"allowDownload":false,"allowTitle":true,"allowDescription":false,"loveButton":false,"loveCounter":false,"videoPlay":"onClick","scrollAnimation":"NO_EFFECT","scrollDirection":0,"overlayAnimation":"NO_EFFECT","arrowsPosition":0,"arrowsSize":23,"watermarkOpacity":40,"watermarkSize":40,"useWatermark":true,"watermarkDock":{"top":"auto","left":"auto","right":0,"bottom":0,"transform":"translate3d(0,0,0)"},"loadMoreAmount":"all","defaultShowInfoExpand":1,"allowTitleExpand":true,"allowDescriptionExpand":true,"allowLinkExpand":true,"expandInfoPosition":0,"allowFullscreenExpand":true,"fullscreenLoop":false,"galleryAlignExpand":"left","addToCartBorderWidth":1,"addToCartButtonText":"","slideshowInfoSize":200,"playButtonForAutoSlideShow":false,"allowSlideshowCounter":false,"hoveringBehaviour":"APPEARS","thumbnailSize":120,"magicLayoutSeed":1,"imageHoverAnimation":"NO_EFFECT","calculateTextBoxHeightMode":"AUTOMATIC","calculateTextBoxWidthMode":"PERCENT","textBoxHeight":0,"textBoxWidth":200,"textBoxWidthPercent":50,"textImageSpace":10,"textBoxBorderRadius":0,"textBoxBorderWidth":0,"textsVerticalPadding":0,"textsHorizontalPadding":0,"titleDescriptionSpace":6,"customButtonText":"","customButtonBorderWidth":1,"customButtonBorderRadius":0,"loadMoreButtonText":"","loadMoreButtonBorderWidth":1,"loadMoreButtonBorderRadius":0,"imageInfoType":"NO_BACKGROUND","itemBorderWidth":0,"itemBorderRadius":0,"itemEnableShadow":false,"itemShadowBlur":20,"itemShadowDirection":135,"itemShadowSize":10,"imageLoadingMode":"BLUR","expandAnimation":"NO_EFFECT","imageQuality":90,"usmToggle":false,"usm_a":0,"usm_r":0,"usm_t":0,"videoSound":false,"videoSpeed":"1","videoLoop":true,"galleryLayout":2,"gallerySizeType":"px","gallerySizePx":300,"allowHover":true,"mobileSwipeAnimation":"NO_EFFECT","gotStyleParams":true,"showVideoPlayButton":true,"modifiedGallerySize":true,"selectedLayout":"2|bottom|1|fill|true|0|true","layoutsVersion":2,"selectedLayoutV2":2,"isSlideshowFont":false,"externalInfoHeight":0,"externalInfoWidth":0},"container":{"galleryWidth":2580,"galleryHeight":1440,"scrollBase":0,"height":null,"width":null}}

The interior combines high-quality old and new styling in keeping with the marriage of the historic former hotel and the eye-catching new extension. You won't find many food options for eating out so be sure to get the messages on your way in.

Messages' are 'groceries' or other things that you'd get from the store. So in Scotland "I'm getting the messages" literally means "I'm doing the (grocery) shopping

THE AREA The location is unspoilt from which the adventurous can see the stunningly picturesque natural wilderness of Caithness in the North of Scotland. Keep your eyes peeled to spot seals and if you’re lucky, dolphins; Minke and Killer whales are often spotted.

Walk to the Ness of Duncansby along the coastal path which starts by the harbour – The walk continues to the Stacks of Duncansby 3km away from John O’Groats. You can easily drive as well.

I have two full days to explore Dunnet Head and the area. There are no touristy areas and so there is no "you must go here" call to actions. Honestly, the best advice I can give is to go into it with a choose your own adventure mindset - there's hiking, wildlife, quaint villages, expansive coastlines, meandering drives.

I will advise dressing for all seasons. You will no doubt experience the Scottish dreich - dull and gloomy. But that can quickly change into sun, rain, blustery winds, a combination of it all. I get why a Scottish Mac is worth having!

THE SURROUNDING VILLAGES The drive to Dunnet Head from John O'Groats will take 30 minutes but I plan to stop along the way, exploring the villages and surrounding areas. I know I say villages but clear your mind of anything bustling and lively and instead pivot to secluded, rustic, quaint.

THE LOCALS Highland cows are icons of Scotland. Often called hairy coos, their heritage stretches back to the days of the clans. These cattle are known to be quite docile but as any good mama will be, they are protective of their young. Spring is lambing season in Scotland so there is no shortage of cuteness literally everywhere. While you will spot a variety of breeds, the distinguishable Scottish blackface is an easy one to spot. The Scottish red deer is undeniably majestic. I came across one during one of my walks and we both froze ala deer in headlights fashion.

THE CROWN JEWEL Dunnett Head is considered the most northerly point of mainland Great Britain. 58 degrees north to be exact! What makes Dunnet Head special is that the area is more or less completely untouched; there are no tourist signs, instructions, shops, or even restrooms to be found. Everything at Dunnet Head is nature as nature intended.

It is a fantastic spot for birdwatching—seabirds of all kinds including shearwaters, guillemots, kittiwakes, and puffins. During the summer there is usually a volunteer from Royal Society Protection of Birds (RSPB) giving information about the seabird colonies. The RSPB site provides great info including a point of interest PDF and a Dunnet Head trail map.

Historically speaking, Dunnet Head is a very important site for Scotland. It was once a World War II radar station, and the remains of this station can still be seen at certain points throughout the Peninsula in Caithness. Stretching even further back before WWI, Dunnet Head’s lighthouse was built in 1831 by a man named Robert Stevenson—the grandfather of a famous novelist. Yes, that one.

Where the land meets the sea. You can easily get front row seats to all the sunsets and sunrises.

The lighthouse is not open to the public and actually is unmanned; operating completely remotely-controlled from the Northern Lighthouse Board in Edinburgh. It contains 51 steps and 9 ladders that reach its top. The structure itself is quite small compared to other lighthouses, standing at only 20 meters high but being situated on a cliff roughly 85 meters high puts the light at an impressive 105 meters above sea level.

The Scottish Highlands have so much to offer that you won't go wrong in choosing where to go but if you're itinerary allows then make your way to the crown of the country where the sky glistens like jewels.

Saigon to Mui Ne by Motorbike: Adventures of a Female Solo Backpacker

A Wedding on Ice: An American couples dream destination wedding in Iceland

Magiska Irland: Swedish Eyes are Smiling on the Emerald Isle